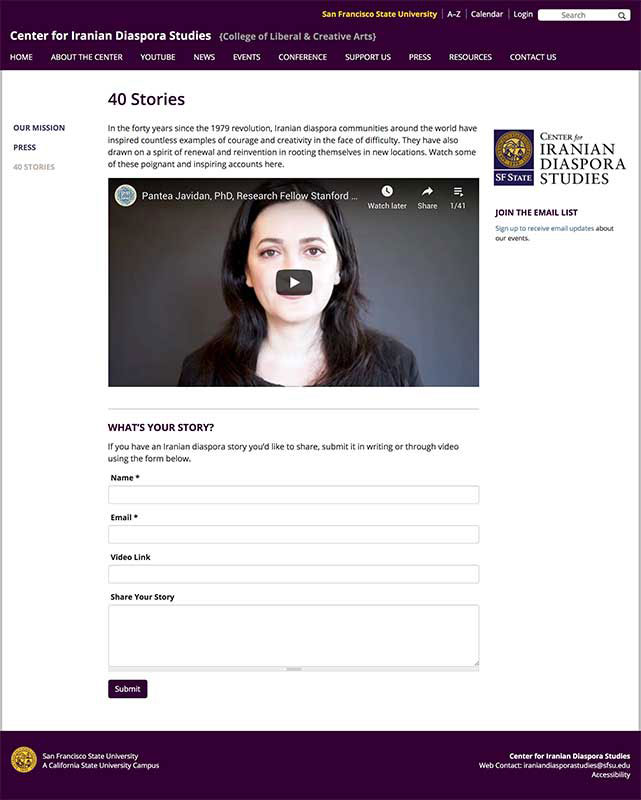 San Francisco State University hired BIG to promote The Center for Iranian Diaspora Studies, a new institute in its College of Creative & Liberal Arts Department. The first academic institute of its kind dedicated to research and teaching about the historical and cultural experiences of the global Iranian diaspora community, the Center launched its first initiative in concert with the 40th anniversary of the 1979 Iranian revolution that forced millions to flee Iran and establish new lives around the globe.

BIG conceived and developed the 40 Stories oral history campaign, which explored underrepresented narratives about identity, discrimination, assimilation, and resilience, as told through diverse voices among transnational Iranians living in exile. These multi-generational Iranian-hyphenates expressed their identities, cultures, and experiences in bold, groundbreaking ways. However, they were also challenged by renewed hostilities between the West and Iran, and a rising tide of anti-immigrant and anti-Muslim sentiment around the globe.

BIG captured candid, heartfelt accounts from journalists, scholars, artists, and cultural creatives of diverse stripes with an aim to inspire deeper connection, compassion, and understanding of diaspora populations the world over.